ALL Gun Owners in California Owe Donald Trump Their Vote in November. Look What HE Did for YOU…

Gun owners in California are celebrating.

BUT DO YOU KNOW WHY THIS HAPPENED?

California’s ban on high-capacity magazines violates the right to bear arms under the Second Amendment, a federal appeals court ruled on Friday.

In a split decision, a three-judge panel of the United States Court of Appeals for the Ninth Circuit gave several reasons for rejecting the state’s ban. Among them, the court said that high-capacity magazines are “protected arms” under the Second Amendment and that they are often used for legal purposes and are not considered “unusual arms” that would fall outside the scope of constitutional protection.

Judge Kenneth K. Lee, who wrote the majority opinion, noted that California enacted the ban on large-capacity magazines, or LCMs, that hold more than 10 rounds of ammunition after “heart-wrenching and highly publicized mass shootings.”

“But even well-intentioned laws must pass constitutional muster,” he wrote. “California’s near-categorical ban of LCMs strikes at the core of the Second Amendment – the right to armed self-defense.”

The law, he wrote, made it a crime for residents to own magazines that come standard in Glocks, Berettas and other handguns.

“Its scope is so sweeping that half of all magazines in America are now unlawful to own in California,” he wrote. “Even law-abiding citizens, regardless of their training and track record, must alter or turn over to the state any LCMs that they may have legally owned for years – or face up to a year in jail.”

You got it… Donald Trump.

President Trump nominated Lee to the seat vacated by Judge Stephen Reinhardt, who died on March 29, 2018.

On January 3, 2019, his nomination was returned to the President under Rule XXXI, Paragraph 6 of the United States Senate.

On January 30, 2019, President Trump indicated that he would re-nominate Lee to a Ninth Circuit vacancy.

Lee is the nation’s first Article III judge who was born in the Republic of Korea and the second Korean American to serve on the Ninth Circuit.

Lee would cause a stir on August 14, 2020, reaffirming that California’s “large capacity magazine ban” was unconstitutional.

So I think it is fair to say that without Donald Trump following his campaign promise of 2016, to clean up the judicial system by appointing constitutional conservative, pro-gun judges, California gun owners would not be high-fiving each other and celebrating the end of the high capacity magazine ban.

Yes, ALL gun owners owe Donald Trump their vote in November. He delivered for you! Give him four more years to appoint a couple more constitutional conservatives on the Supreme Court and HUNDREDS more judges like Lee to the lower courts and President Trump will make a positive difference for gun owners for the next two generations.

There is only ONE Pro Gun vote in November and that vote is TRUMP!

Spread the truth about our Pro-Gun President, Donald Trump.

To reward you for spreading the truth, allow me to give you a $2,000 Four Day Defensive Handgun Course absolutely free of charge, with no hidden surprises, catches or obligations that you can use at any time in the future with no expiration date or transfer to anyone who has not yet attended a course at Front Sight. 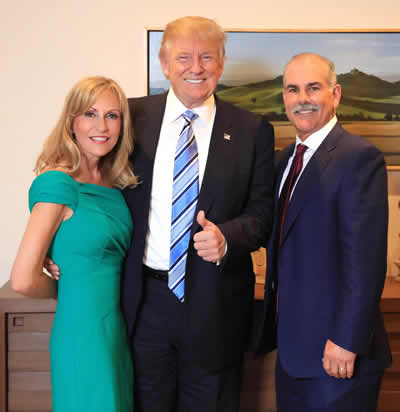 Front Sight is very proud of our President.

We helped get him elected.

We were smart to do so.

And God Bless America the Great!