My mistake, Antifa, not “patriots” stormed the Capitol on January 6…

Before I share with you the videos, eye witness accounts, and photographs that prove the “storming of the Capitol by Trump supporters” was a false flag attack by Antifa and BLM members, lets first define the word “patriot.”

Definition of patriot: one who loves and supports his or her country.

A synonym for “patriot” is loyalist. Webster’s defines “loyalist” as follows:

Definition of loyalist:: one who is or remains loyal especially to a political cause, party, government, or sovereign.

I believe those definitions clearly describe the Trump supporters who were in attendance in Washington, DC on January 6. Trump patriots love and support our country. Trump supporters are loyal to President Trump, his MAGA party, the United States of America and the US Constitution. And most important, Trump Patriots and Loyalists have NEVER been violent.

Definition of sedition: incitement of resistance to or insurrection against lawful authority.

Definition of insurrection:: an act or instance of revolting against civil authority or an established government.

Don’t you find it extremely duplicitous (double-dealing, two-faced, deceitful, dishonest) that the Corruptocrats, their Left Wing Media mouthpieces, and their Social Media Censors allowed wide-spread insurrection by BLM and Antifa criminals for MONTHS of looting, burning down cities, assaults and murders across the country, without EVER calling out these criminals for their insurrection, but IMMEDIATELY charged President Trump, his patriots and loyalists with sedition and insurrection when some barricades were “knocked down,” some windows were broken, and some unarmed citizens invaded the halls of Congress IN PROTEST for the CORRUPTOCRATS UTTER FAILURE to UPHOLD VOTING LAWS, allowing the most fraudulent election theft in America’s history?

President Trump and his supporters are not seditious or insurrectionists. THEY ARE PATRIOTS.

In classic Corruptocrat gaslighting technique, it is really President Trump and his loyalists who have been the victims of sedition by the SILENCE and FAILURE of the Corruptocrats, their Left Wing Media mouthpieces, and Social Media Censors to expose and report all the fraud that victimized the 80 million patriots who voted for President Trump.

In classic Corruptocrat gaslighting technique, it is really President Trump and his loyalists who have been the victims of insurrection on a massive scale, in the extremely illegal, highly sophisticated, and well-coordinated attacks on our established government voting system that ultimately stole the election from 80 million patriots who voted for President Trump.

And to add insult to injury, it wasn’t even Trump Patriots who were responsible for knocking down the barricades, breaking the windows, and invading the halls of Congress. It was BLM and Antifa leading the breach of security. Here is the proof…

BREAKING REPORT: Former FBI Agent on the Ground at US Capitol Says at Least One Bus Load of Antifa Thugs Infiltrated Trump Demonstration

According to a former FBI agent on the ground at the US Capitol, at least one bus load of Antifa goons infiltrated the Trump rally as part of a false flag operation.

Chaos erupted at the US Capitol building on Wednesday after Vice President Mike Pence announced he would not block Biden’s electors.

Trump supporters are being blamed for all of the violence and chaos but according to a former FBI agent, Antifa has infiltrated the Trump rally.

Via investigative reporter Paul Sperry: Former FBI agent on the ground at U.S. Capitol just texted me and confirmed that at least 1 “bus load” of Antifa thugs infiltrated peaceful Trump demonstrators as part of a false Trump flag ops

There are eyewitness accounts of people in dark clothing urging people to rush forward and start anti-government chants in the crowd.

Here is one of the Antifa members… 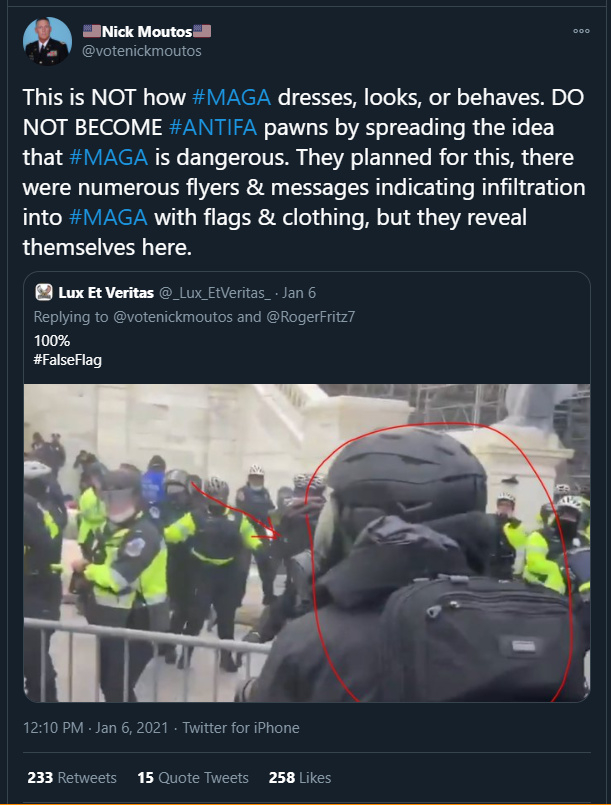 And from Rick Green… 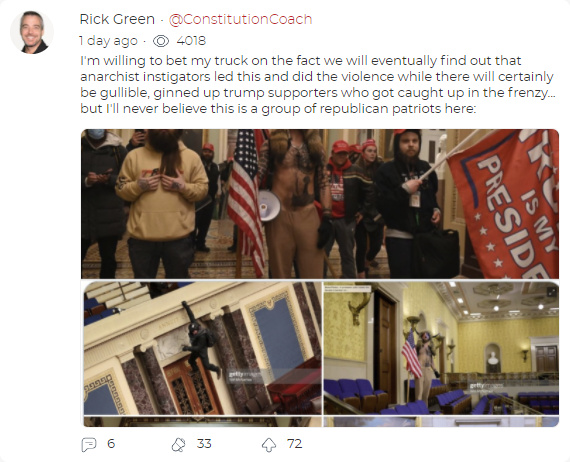 And WHY would the DC Police simply remove barriers to allow protestors to enter Capitol?

Video has surfaced of Capitol police removing barriers holding back Trump supporters yesterday which allowed them to enter the Capitol.

What really went on yesterday?  Video has surfaced of Capitol police allowing protesters into the Capitol Building:

It’s unclear if the barriers that were moved by police cordoned off a restricted area of the Capitol grounds themselves, which was intended to be inaccessible to protestors.

It is unclear if this was the policy around the Capitol building but it does appear that at one location manned by the police, the police removed the barriers and allowed Trump supporters into the capital.

And what is this? Staged and practiced invasion of the Congressional chambers?

You can see the officer looked right at her before pulling the trigger. Additionally, there were cops armed with AR-15s right behind her. 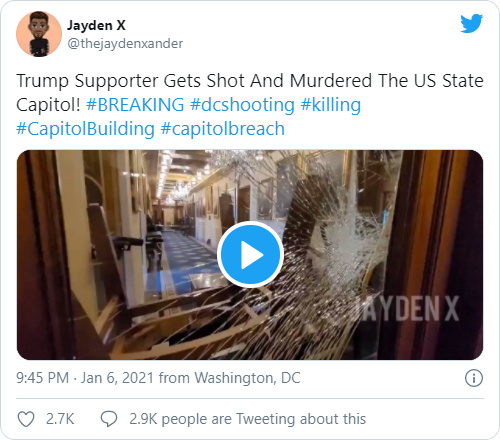 Even leftists are saying this was a horrific crime which should be aggressively prosecuted: 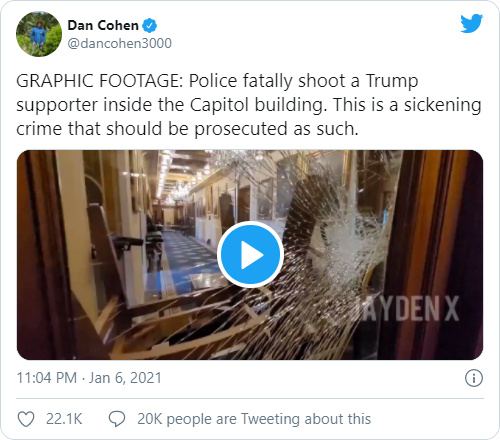 Here’s additional angles of the shooting:

And what is this BLM Activist doing in the middle of filming the shooting of an unarmed woman?

Why Was Founder Of Far-Left BLM Group Filming Inside Capitol As Police Shot Protester?

Pence published a statement moments before the Electoral College count began. He will not side with President Trump.

During yesterday’s protest in Washington D.C., a Turmp-supporting US Air Force Veteran, Ashli Babbitt, was shot dead by a Capitol Police officer (who has been placed on leave) as she attempted to climb through a broken window to bypass a barricade, along with other Trump supporters. 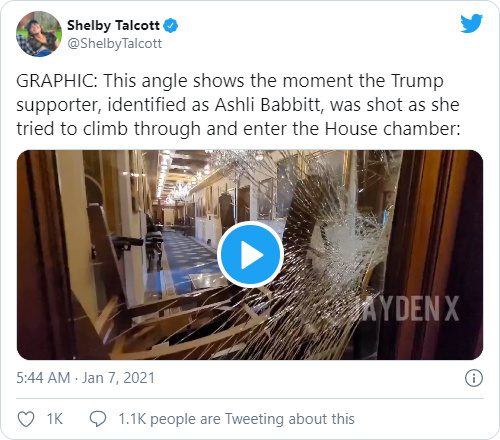 Filming the incident from behind Babbit, however, was Utah resident John Sullivan – founder of the far-left organization “Insurgence USA” who made headlines in July after he was arrested for intimidating drivers in Provo. Sullivan was interviewed by the Daily Mail and CNN following Wednesday’s shooting – both of which failed to provide a satisfactory answer as to why he was there in the first place. 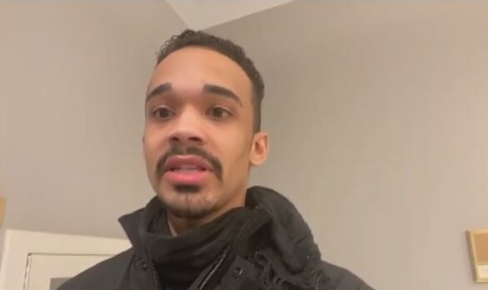 Sullivan told the Mail that “he was not at the Capitol as part of the protest but did not specify what exactly brought him there.”

So Trump Patriots, where do we go from here?

President Trump is still our President and as long as he willing to fight for us, and remains in the White House as the President of the United States, I am at his side ready to serve him in any manner he requests.

There is unconfirmed information that something BIG is still to come BEFORE January 20 that will result in arrests of those directly and indirectly involved with the massive voter fraud, which will ultimately return the 2020 Presidential Election to its rightful winner, President Donald Trump.

In order for this to happen, it will take courageous executive action by President Trump in the next few days, that is fully supported by the military. No further evidence of fraud is needed. President Trump has more than enough evidence of foreign and domestic election fraud to invoke any number of Executive Actions, and I have shared the fraud with you for the last two months.

Interestingly, just as I was about to send this email off to you, I received this…

Sounds like President Donald Trump is not willing to fight any further to overturn the fraudulent 2020 Presidential Election. Disappointing to say the least, or is something else about to happen?