More states are coming forward to protect the US Constitution and our Bill of Rights against the socialist onslaught of China Joe Biden and the Corruptocrats.

We have the Republican controlled states filing lawsuits and passing legislation to keep China Joe Biden and the Corruptocrats from destroying the country.

This is why, if you can, you should move to RED states and support those states who are willing to fight for the American way of life.

Here are a few more examples. As these succeed, more will follow…

JEFFERSON CITY — The Missouri House on Wednesday gave first-round approval to a proposal that would prevent local law enforcement from enforcing federal gun laws that aren’t on the books in Missouri.

Lawmakers approved the proposal Wednesday on a 107-43 vote.

Under the original version of Taylor’s measure, individual officers would be held liable if they were found to knowingly enforce or attempt to enforce federal gun laws nullified in Missouri.

An amendment by Taylor, and approved by the House, struck an officer’s individual liability, instead allowing people to sue individual police departments if they infringe upon their rights, with a minimum fine of $50,000.

“It would be against the department rather than the individual,” Taylor said.

Rep. Peter Merideth, D-St. Louis, said this amounted to defunding the police — a slogan Republicans used against Democrats during the 2020 campaign.

The States are starting to push back against Biden’s authoritarian rule.

Stitt’s reason to nullify Biden’s Executive Order is due to the fact Biden’s executive order destroys thousands of jobs in the gas and oil industry and violates the Constitution too.

What is our recourse when our own government criminalizes our most basic rights while it allows Black Lives Matter and Antifa to rampage through our streets with impunity? Is there no Plan B when the federal or state governments treat all conservatives like terrorists, business owners like pariahs, and those who yearn to breathe unmasked air like murderers? Well, one Missouri county is demonstrating the importance of sheriffs and county officials returning to self-government and interposing between the governmental usurpers and the most sacred rights of the people.

On Feb. 3, the Newton County, Missouri, Commission passed a bill that will not only block federal enforcement of unconstitutional gun policies, but criminalize their implantation thereof within the jurisdiction of the county. The “Second Amendment Preservation Act of Newton County Missouri” declares that “all federal acts, laws, orders, rules, and regulations passed by the federal government and specifically any Presidential Administration whether past, present, or future, which infringe on the people’s right to keep and bear arms as guaranteed by the Second Amendment of the United States Constitution and Article I, Section 23 of the Missouri Constitution shall be invalid in the county.”

That section of the Missouri constitution reads as follows:

That the right of every citizen to keep and bear arms, ammunition, and accessories typical to the normal function of such arms, in defense of his home, person, family and property, or when lawfully summoned in aid of the civil power, shall not be questioned. The rights guaranteed by this section shall be unalienable. Any restriction on these rights shall be subject to strict scrutiny and the state of Missouri shall be obligated to uphold these rights and shall under no circumstances decline to protect against their infringement.

Rising federalism: States move to take back their rights against the Biden regime

As Joe Biden makes massive moves in every progressive direction possible with overreaching executive orders, several states are setting the stage to stop Democrat-led Washington DC from going beyond their enumerated powers. Federalism is back, baby!

Limited-government federalism is what most of the founders envisioned as a permanent ideology guiding this nation through history. They wanted power divided not only between branches of government but also between the jurisdictions. Thomas Jefferson wanted a government in which states were supreme. Alexander Hamilton wanted states and the national government to share powers. What we have today would be opposed by both as Washington DC holds supremacy against the Constitution itself.

States are pushing back. We started seeing this happening under Barack Obama as conservative states went after the federal government over his massive overreach. Then, Democrats learned to embrace federalism under President Trump, particularly as it pertained to sanctuary status and immigration policies. Now, Republican states are pushing back against the Biden regime, which in its early days has already demonstrated a willingness to overstep their boundaries more so than his two predecessors.

South Dakota is setting an example for others to follow…

by Chris Donaldson – about 12 hours ago

Just three weeks into former Vice President Joe Biden’s administration, it is already clear that he will rule by decree instead of honoring the traditional legislative process.

Quickly discarding his hollow appeals for unity, good old Joe from Scranton has signed off on a series of sweeping executive orders that have rolled back the America first agenda of former President Donald J. Trump and dashed any false notions that he is a moderate.

Now that heavily-militarized Washington D.C. and the one-party state have effectively snuffed out the democratic process at the federal level, it is up to the states to assert their rights against the tyranny of the swamp.

That is what is happening in South Dakota where the legislature is seeking the power to nullify Biden’s orders on the grounds that they are unconstitutional. 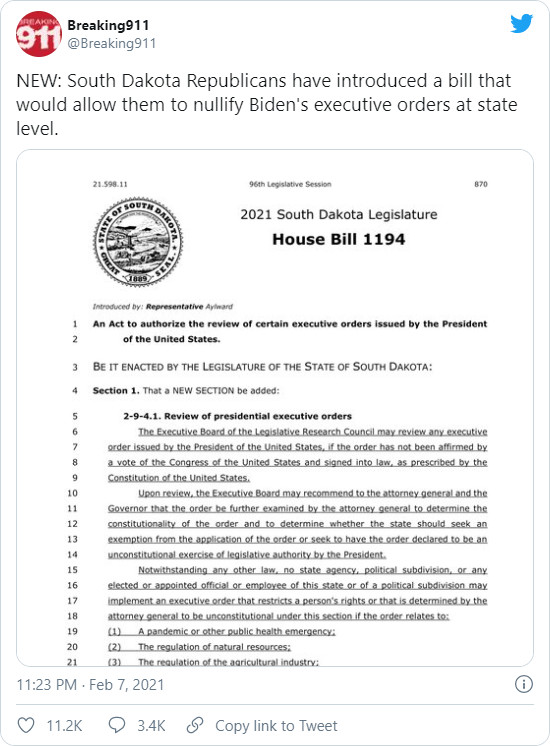