12 Reasons Why I voted Democrat…

If you read the subject line and are so enraged with me that you are ready to have a stroke, calm down.

Seriously, sometimes people read just the subject line of my emails and WITHOUT reading the entire email, fire off a scud missile response that they soon regret.

Yes, the subject line is to get you to open the email, because you are thinking, “What? No! Did Dr. Piazza vote Democrat? Tell me it ain’t so, Joe!”

It ain’t so. For a hundred different reason I would NEVER vote Corruptocrat.

NOW, If YOU voted Democrat, get off my list and don’t ever come to Front Sight. You are not welcome. You do not deserve Front Sight because YOU voted for an anti-American party that would close Front Sight and take everyone’s guns if they could get away with it.

As political satire, (DEFINITION: Political satire is satire that specializes in gaining entertainment from politics; it has also been used with subversive intent where political speech and dissent are forbidden by a regime, as a method of advancing political arguments where such arguments are expressly forbidden.) I give you a newspaper opinion piece entitled, Twelve reasons why I voted Democratic… 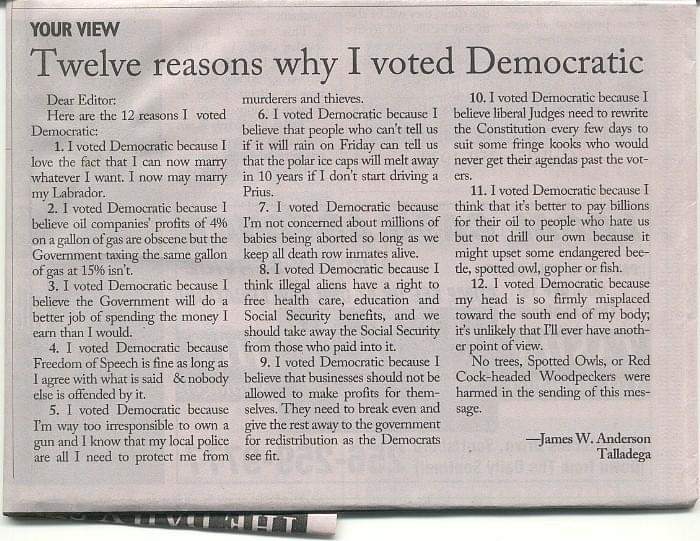 I predicted the Imposter-in-Chief, China Joe Biden, would not last a month after inauguration due to his cognitive decline. The Corruptocrats knew this was the case, but the Left Wing Media and Social Media Censors would not let any information surface regarding Bumbling Joe during the election cycle.

The fix was in and Commie Harris as President was the Corruptocrats plan all along.

Well Dementia Joe lasted longer than I expected, but not much longer.

The Democrats are moving him out. See this article…

Biden is a propped up puppet.

President-imposed Joe Biden is already being undermined by Democrats who want him out of the picture and replaced with an individual who does not have severe cognitive impairments.

Three dozen House Democrats have signed a letter urging for the nuclear codes to be removed from Biden as they attempt to neuter the illegitimate Commander-in-Chief before his dementia leads to a potential disaster.

In their letter, the disingenuous Democrats framed it as if Trump, who pulled troops out of many different countries, was the reason they were taking this order even though he was just ousted from office.

“Vesting one person with this authority entails real risks,” states the letter, which was led by Rep. Jimmy Panetta (D-CA). “Past presidents have threatened to attack other countries with nuclear weapons or exhibited behavior that caused other officials to express concern about the president’s judgment.”

“While any president would presumably consult with advisors before ordering a nuclear attack, there is no requirement to do so,” the letter continues. “The military is obligated to carry out the order if they assess it is legal under the laws of war. Under the current posture of U.S. nuclear forces, that attack would happen in minutes.”

SLEEPY? Biden Yet to Deliver First State of the Union Amid Confused Public Appearances

Are they keeping him out of view?

Joe Biden is yet to give his first State of the Union address as President, disregarding precedent and conventional timing for the presidential address.

Presidents usually deliver the speech to Congress in February. President Donald Trump gave the latest first State of the Union address delivered by a President since 1977 when Jimmy Carter declined to give a SOTU address, with Trump speaking on February 28th, 2017.

Nothing on President Biden’s public calendar advertises a State of the Union speech. It’s likely that a speech, if it even occurs at all, would occur in March, but it’s unclear if Biden even intends to give one.

The snub of the extended public speech comes as recurring questions regarding Biden’s mental acuity and sharpness reemerge. With Biden generally appearing sharp and fluid in an extremely limited schedule of public speaking appearances as a candidate, some of his recent speeches have featured the President stumbling over his words and appearing to struggle cognitively with his delivery.

And watch this video…