2 Jihadists were stopped by the 3 Secrets of Sight Alignment, Sight Picture, Trigger Control PLUS The Combat Mindset…

Like the buzzards that they are, the Left Wing Media and the Gun-Grabbing Corruptocrats are in a feeding frenzy over all the dead bodies in Boulder, Colorado.  The calls for more gun control from these tragedy scavengers is reaching a crescendo that even woke up Sleepy Joe Biden to make a statement someone wrote for him, calling for “immediate gun control.”

What the Left Wing Media Maggots, and the Social Media Censors, and the Gun Grabbers never want you to know is the only thing that stops a bad guy with a gun is a TRAINED good guy.  Front Sight has trained a million of these “good guys with guns” and several hundred are training at Front Sight, right now, as you read this.

I’ll bet you did not know, that back in 2015, in Garland, Texas, there was a good guy with a gun who understood terms like “flash sight picture,” “trigger control” and the “Combat Mindset.” He was a “gun guy.”  He was trained. He practiced. As a result, two Jihadists were immediately killed, hundreds were saved, and you never heard a word about it.  Why? Because it didn’t fit the Gun-Grabbing Corruptocrats’ agenda to disarm Americans.

In juxtaposition to the carnage in Boulder Colorado that the Left Wing Media and Corruptocrats are shoving down your throat right now, read this story of the REAL SOLUTION to gun violence and WHY all Americans should be trained like the Hero of Garland Texas.  Then take me up on my offer to train you, so you too can someday be that Good Guy with a Gun…

How a Texas Cop Stopped the Jihadi Attack in Garland, Texas 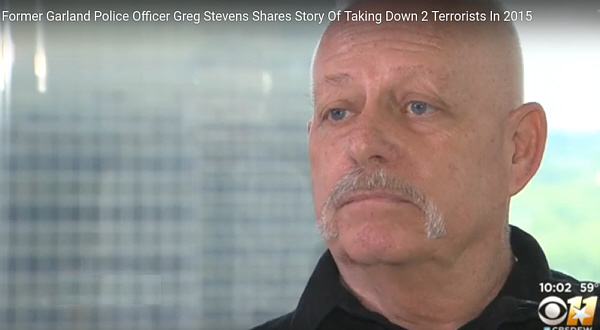 Screenshot from CBS interview in Dallas, May, 2019, cropped and scaled by Dean Weingarten

In Garland, Texas, on 3 May, 2015, Gregory Stevens, veteran police officer with the Garland Police Department, was working off duty as armed security for the “Draw the Prophet” cartoon contest event.

Pamela Geller organized the Draw the Prophet event as a response to Islamic demands that Western Civilization submit to Islamic censorship.

The particular demand was no one would be allowed to draw images of the Prophet Mohamed; or to mock him; or make fun of him.

The infamous attack on the Charlie Hebdo offices in Paris had occurred just five months earlier, by two Islamists with AK-47 type rifles and Tokarev pistols.

Many will remember the Draw Mohamed event, in the Dallas suburb of Garland, was attacked by two Isis recruits.

Few know the details of how one prepared gunfighter police officer faced two Islamic riflemen armed with semi-automatic rifles, handguns, plenty of ammunition, soft body armor, and the element of surprise. He fought them at close range, and prevailed.

Gregory Stevens was that officer. For his own safety and security, and, possibly, to shield the FBI from exposure, the details of the attack and his defensive actions were hidden for more than a year.

Many of the details have been revealed, Officer Stevens explained the events of that day in a video presentation which has been viewed by less than a thousand people on Youtube. It deserves a much wider audience. The video is an hour and eight minutes long.

Officer Stevens was working extra hours as armed, uniformed security for the event. He would turn 60 in a few days. He had long experience as a traffic officer. He was a gun guy, who preferred a 1911 .45 Auto.

As a concession to modern pistol design, he had been issued a Glock model 21, chambered in .45 Auto. He was carrying his Glock in his standard duty rig, with a 13 round magazine, a round chambered, and two spare magazines, for a total of 40 rounds of Speer Gold Dot 230 grain hollowpoints.

As with many accomplished people in the gun culture, Gregory Stevens downplays his skills. He says:

“I am a good shooter and I practice, but I am not a crack shot that can shoot quarters out of the air.”
“I try to keep my skills at a very high level.”

One of the audience members quipped: “We’re glad you practiced!”

“I am too.” Answered Greg Stevens.

As the attack unfolded, those skills would become critical.

Our 25 new ranges are now completed! I want to fill them with responsible citizens. So I am giving you a $2,000 Four Day Defensive Handgun Course absolutely free of charge, with no hidden surprises, catches or obligations that you can use at any time in the future with no expiration date or transfer to anyone who has not yet attended a course at Front Sight.

And what’s even better, is that I will also give you even more amazing benefits and bonuses including placing $100 in the Front Sight account you establish when you secure your free handgun course and give you the opportunity to get free guns… LOTS of free guns.

Be a part of the REAL solution to gun violence…

It all starts with showing me you are a patriotic citizen who wants to be a walking, talking representative of safe, responsible, proficient and expertly-trained gun ownership, by grabbing your free course!