Today was one of those days where there is a lot of important news to report on varied topics.

So there is no “theme” for this blog, just the information.

Regarding the Capitol Siege of January 6, there is more evidence, that even CNN and the FBI cannot overlook that proves Antifa and BLM were behind the riot.

And I am sharing an unconfirmed, but very bold warning for you to heed, or be entertained at the possibility and probability of it being true or false.

The biggest, gun industry news is the NRA filed for bankruptcy today. See article below…

Less than a week after President-elect Joe Biden on Jan. 8 promised to “defeat” the National Rifle Association while he’s in office, the organization said in a statement tonight that it has filed bankruptcy petitions in U.S. court as part of a restructuring plan.

The NRA says the plan can be summed up quite simply: We are DUMPING New York, and we are pursuing plans to reincorporate the NRA in Texas.

The NRA’s lobbying arm recently published an article that says Biden would “begin a concerted attack on the rights of American gun owners” after being inaugurated.

“We must be ready for the onslaught,” the post reads, adding that a Biden administration, if officials get their way, “will ban and confiscate the most-commonly-owned rifle in the United States” and “will arbitrarily limit the number of guns that can be bought per month,” among other measures.

Watch the OsamaGate video below to the end. It appears a bit goofy near the beginning with the “wizard” looking CIA whistleblower, but the rest of it is solid, and explains what you and I knew was not right when Obama stated Osama was killed and quickly buried at sea. Yes, your gut told you way back then that such a statement smelled fishy. The truth about what really happened is MUCH worse than we ever suspected…

Here’s more evidence, that even CNN and the FBI cannot overlook, that proves Antifa and BLM were behind the January 6 breach of the Capitol.

Screenshots from a Discord chat channel allegedly hosted by John Sullivan — a far-left, anti-Trump activist who appears to have incited violence at the U.S. Capitol while posing as a journalist — reveal he and his followers infiltrated the January 6th Save America March in Washington, D.C.

The unearthed screenshots follow Sullivan’s arrest for his role in the Capitol riot, which included calls to violence such as “we gotta get this shit burned” and “it’s our house motherf*ckers,” an affidavit can reveal.

The Discord chat channel is allegedly affiliated with Sullivan’s Insurgence USA group, which describes itself as “forming a rainbow coalition to unite all people under one banner to fight for liberation and freedom for all people.”

“We are the revolution, lets [sic] show them the power of the people united,” the group’s page adds.

The chat logs corroborate the recent federal charge against Sullivan, noting he didn’t attend the riot to “report” but rather to serve as an agent provocateur. Sullivan — who uses the name Jayden X — can be seen sending an image of himself in a Trump 2020 hat captioned with “counter intel” on January 6th: 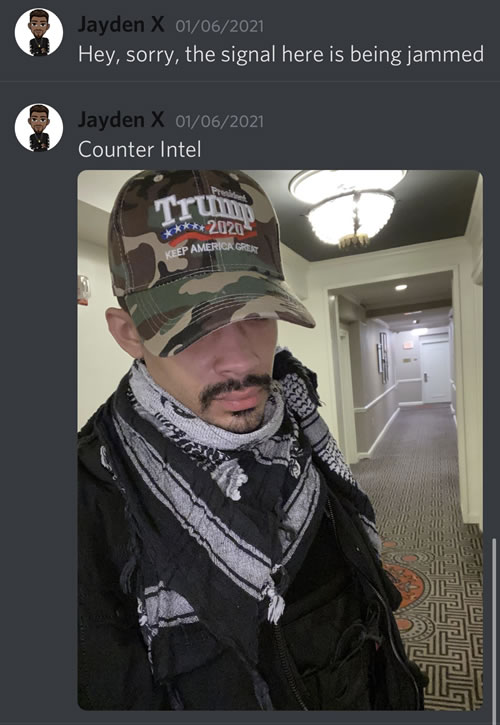 Following the riots, other Discord user revealed they disguised themselves as Trump supporters by wearing hats and shirts with the president’s insignia: 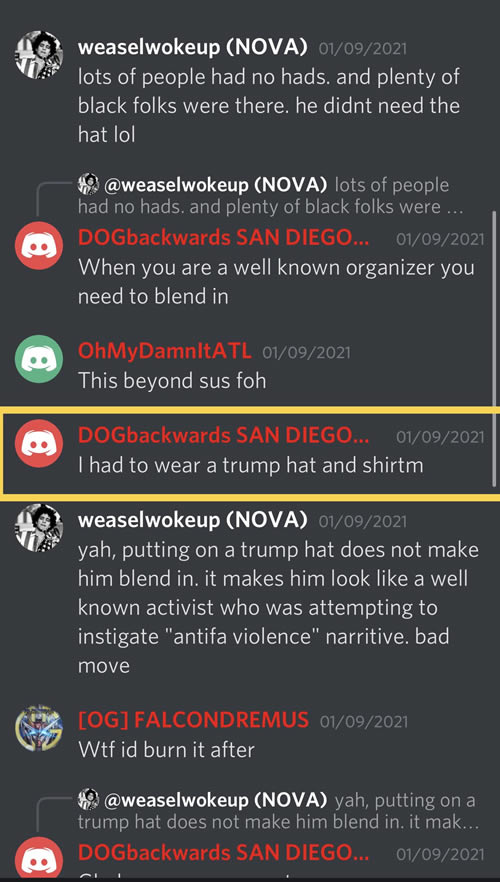 And under the categories of “This Sounds Incredible!” or “This Does Not Sound Credible.” or “I Hope it is True!” or “How Could this Be True?” I present you with this video to prepare and warn you at best, or your entertainment at least…

With everything that has happened in the last week to take attention off the most massive theft of an election in American history, let’s not forget what happened, who did it, and who is ultimately responsible for EVERYTHING that has happened since the wee hours of November 4.

Despite what the Left Wing Media and Social Media Censors want everyone to believe, the 80 million patriots who voted for President Trump are not responsible for the current state of the country.

Those responsible for the mess that has become the United States of America include the Left Wing Media, Social Media Censors, the Do-Nothing Courts, and the Corruptocrats nationwide, both Democrat and Republican who failed to acknowledge, investigate, and condemn the illegal and fraudulent election results. The demise of our country is THEIR doing.

Watch this video, from a news agency who actually did their job, to remind you of the massive fraud of the 2020 Presidential Election…

Here is more video proof that the George Soros backed Antifa/BLM infiltrated the January 6 Trump Rally and initiated the breach of the Capitol. These people should be held financially and criminally responsible for the damage and deaths that resulted from their false flag attack…

Sullivan has maintained in multiple interviews that he regularly attends protests only to record what’s going on, but did not actively partake in the insurgence in Washington.

“It’s just recording, solely, and not being active in it,” he told Fox News last week. 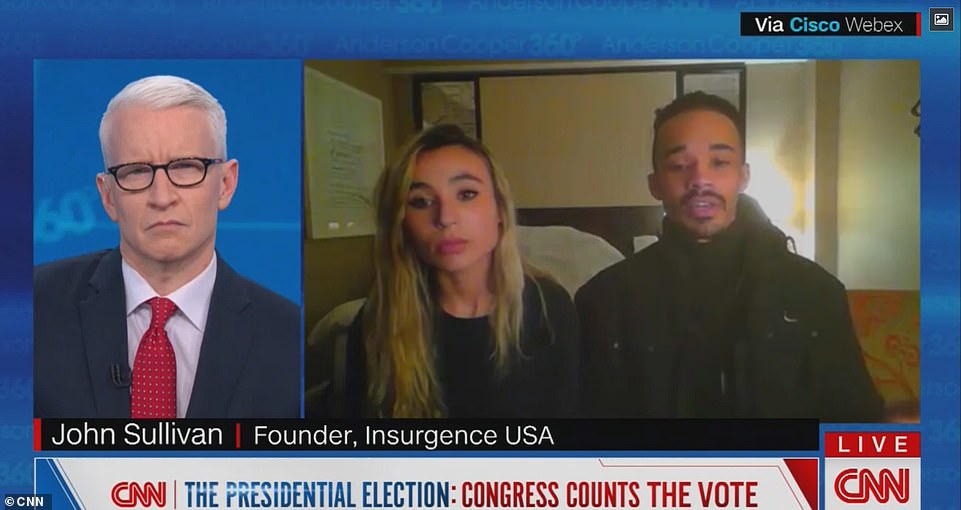 Yet, in footage streamed to his followers on Discord, Sullivan, who uses the name “Jayden X” on the app, can be heard inciting violence from inside the U.S. Capitol and boasting about breaking a window.

“If we don’t get in, we’re going to burn this sh*t down,” he gloats. “Let’s go! This sh*t’s ours. F*ck yeah. I can’t believe this is reality. We accomplished this sh*t. We did this sh*t together.

This footage comes from a source who wishes to remain anonymous for security reasons.

Moments after Sullivan captured Air Force veteran Ashli Babbitt getting shot and killed in the Capitol, a blonde woman accompanying Sullivan who appears to be his accomplice, Jade Sacker, gleefully exclaims, “We did it!”

“You were right! We did it,” she boasts.

“Dude, I was trying to tell you. I couldn’t say much,” Sullivan replies. “Is this not going to be the best film you’ve ever made in your life?”

And look at this…